These are trying times that might make you think building a new Javascript framework is a good idea. Resist that urge.
Texas, USA

zippy72
There was ever a time when building a new Javscript framework was a good idea?

tedgould
reply
Not saying I resemble this graph...
Texas, USA

We're adding a new show to the DPReview TV lineup, and you may have seen the work of our new host before. Don Komarechka is a landscape and nature photographer, and he's a master of using macro photography and simple science experiments to turn otherwise unseen worlds into stunning images.

In this series he'll share some of these projects so you can recreate them at home if you're feeling ambitious – or you can just sit back and enjoy watching a mad scientist at work. In this first episode he demonstrates the ins and outs of photographing frozen soap bubbles. Check it out – and be sure to subscribe to our YouTube channel to get new episodes of DPReview TV every week.

On Monday, the COVID-19 Response Team at Imperial College London released a report that describes its efforts to create a model of how various control efforts could alter the trajectory of the coronavirus pandemic in the US and UK. The report is being published by a World Health Organization publication, but it had been provided to the governments of these countries, where it is reportedly influencing their responses.

The report paints a grim picture of millions of deaths in the two countries if nothing is done, as infections greatly outstrip the capacity of their hospital systems to handle patients. But it does find that aggressive steps can hold off the virus until an effective vaccine can be developed, although those will mean shutting down many aspects of society for over a year.

Before this induces panic, however, it's important to emphasize that these outcomes are based on a model that, because of the incomplete information we currently possess, is imperfect and has to rely on a number of assumptions. We'll go over all of these limitations before going into detail on the conclusions the Imperial College team derived from the model.

Epidemiology is the study of diseases at the population level. Among the tools of this field are epidemiological models, which attempt to represent how infectious diseases can spread within a population. So, understanding this study requires understanding how the model handles virtual infections.

In this study, the model goes down to the level of individuals. They're distributed in a country—in this case the UK or US—based on high-resolution population data. Contacts with other individuals, which enable the spread of an infectious agent, are made in a number of locations: within a household, at school, at work, and in social settings like shopping. The researchers used census data to get typical household sizes, as well as the age distribution of local populations. Average class-size data was used to handle contacts at school, while workplace size and average commute distances were used to model workplace contacts.

Overall, this is an incredibly detailed model and has already been used for publications that have been through peer review.

With the population in place, you have to add the coronavirus. Here's where the researchers are dealing with imperfect information, since all of our data on the virus is necessarily incomplete. So, while we know that each infected individual tends to infect about two others, we don't have a precise measure of its infectivity, and even a small difference in this value will get amplified when expanded to a national level.

While the authors do their best to base their assumptions on real-world data here, all of values that describe the coronavirus' behavior are uncertain. They used an incubation period of five days and assumed transmission starts 12 hours before the onset of symptoms. They also assumed things like the percentage of cases that would require critical-care facilities (30 percent), the overall death rate (half of those in critical care, biased towards the elderly), etc. The values they used reproduce the limited information we have on the spread of the pandemic so far, but the irregular testing in most countries almost certainly means that some of them will be off.

With a working model of the pandemic in the UK and US, the researchers could try out different scenarios, from doing nothing through an increasingly draconian combination of limits on population movements. These roughly break down into two categories. One is mitigation, an attempt to slow the spread so that the country's health care system isn't overwhelmed before previously infected people start providing herd immunity. And the second is suppression, where various forms of isolation are used to try to lower the rate of transmission to the point where each infected person has less than even odds of handing it on.

There's no hard boundary between these categories, though. Closing schools would be a mitigation tactic on its own but can be part of a package of measures used to try to suppress the virus. All told, the researchers consider combinations of the following methods:

Some of these have mixed impacts. For example, social distancing efforts are assumed to increase the number of transmission opportunities within a household. And closing schools is assumed to increase the contact of people within a neighborhood, as children might wind up playing together more. This isn't completely realistic—compliance with social distancing would obviously get better if news reports of the collapse of the hospital system start rolling in—but they're not unreasonable figures for a model.

Bad things, if nothing's done. In the UK, the epidemic peaks in mid-May and reaches levels that are far beyond the country's critical-care infrastructure can handle, resulting in about 22 deaths per day for every 100,000 people. That works out to about 14,000 people dying a day for a couple of weeks, with half a million total deaths. In the United States, a younger and more diffuse population means the peak comes a bit later and doesn't rise as high per capita, but the larger population means that over 2 million people end up dead.

Note that this does not include the ancillary deaths that will occur from people needing critical care for reasons other than the coronavirus. 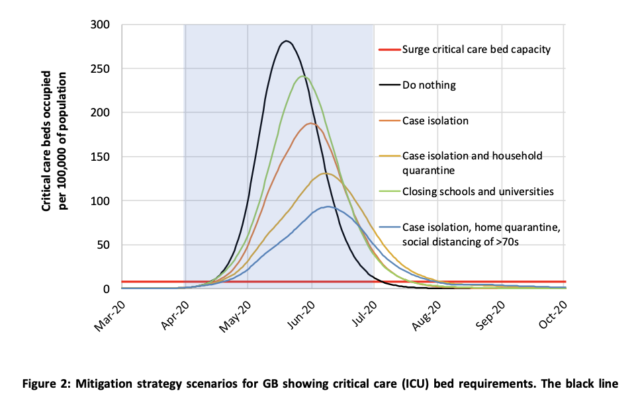 When looked at in terms of critical-care facilities, most of the mitigation strategies don't work especially well. While all of them do flatten the curve to various degrees, closing schools or isolating infected people still leave hundreds of thousands of people who need hospitalization without any place to go. Even a combination of measures (case isolation, home quarantine, and social distancing of the elderly) completely swamps the medical system.

To really have an effect in either the UK or US, general social isolation is needed. In combination with household quarantine and case isolation, the need for critical-care hospital beds will be exceeded for several months, but the excess will only be slight and might be manageable with emergency measures. The combination of school closures, case isolation, and general social distancing keeps the peak infections low enough to ensure critical care's capacity isn't exceeded, and problems will gradually taper off after the peak in April.

The problem here is that the virus will remain circulating at low levels in the population in this scenario. The authors model releasing the restrictions in September, and by October, a peak appears that rivals the one caused by doing nothing to begin with. (Although less effective forms of suppression have a lower peak because so many people ended up infected in the intervening months.)

On their own, the results would suggest that the best way to minimize the death rate is to maintain social distancing indefinitely, until a vaccine is developed that provides sufficient protection for herd immunity.

The biggest test of this model is that some countries that were aggressive about testing and suppression efforts have successfully limited the spread of the coronavirus and are beginning to lift their restrictions. If the authors' model is accurate, then countries like China and South Korea are at risk of seeing a resurgence of cases.

But the researchers also see the possibility of the initial suppression strategy giving these countries a long-term edge. With elevated vigilance and a well-developed testing and isolation infrastructure, it should be possible for them to identify newly arrived cases and situations where the virus continues to circulate in the background. And by tracing contacts and aggressive testing, it should become possible to keep the coronavirus in check, a process that South Korea is now starting to attempt.

While the US and UK have missed the boat on preventing the establishment of the pandemic within their countries, it remains possible that they will not have to sustain aggressive suppression measures until a vaccine is developed. If the South Korean efforts are successful, they can provide a model for how to ease up on the restrictions needed for suppression. And add a new wrinkle to any epidemiological models of this coronavirus outbreak.

Are Hospitals Near Me Ready for Coronavirus? Here Are Nine Different Scenarios. by by Annie Waldman, Al Shaw, Ash Ngu and Sean Campbell
Tuesday March 17th, 2020 at 5:20 PM

tedgould
reply
Depressing, but real data about hospital capacity that can be customized to your region.
Texas, USA

1 Comment
The Senate majority leader has encouraged judges thinking about stepping down to do so soon to ensure that Republicans confirm their replacements this year. 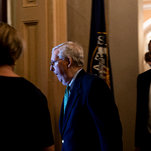