Eleven months ago, Apple CEO Tim Cook declared privacy a “fundamental human right.” The affirmation came as the iPhones his customers carry in their pockets store ever more sensitive information and the company seeks to make privacy a key differentiator as it competes with Google and other rivals.

On Wednesday, the company sought to make good on its commitment with the release of iOS 14. It introduces a bevy of privacy features designed to give iPhone users more control over their personal information. The protections are intended to rein in app developers, online providers, and advertisers who all too often push the limits of acceptable data collection, assuming they don’t fully step over the line.

I spent a little more than an hour testing some of the features. Here’s a brief description of each, how to use them, and some first-blush impressions of how some work.

Camera and mic access notifications iOS has long given users the ability to control what apps are allowed to access the camera and mic. Now, Apple is going a step further. With iOS 14, users actually get notice in realtime whenever an app does, in fact, capture audio or video from a phone. It also provides a list after the fact of apps that have recently accessed the mic or camera.

The notifications shown in realtime can be easy to miss, which is probably what Apple intended. The image below shows the home screen of an iPhone SE when a guitar tuner has the mic turned on. 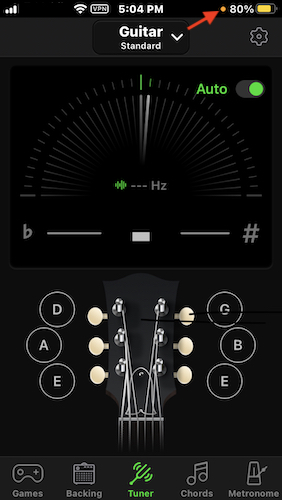 The sole indicator is the orange dot just to the left of the battery indicator. (On other iPhone models, the dot appears above the signal strength meter). Privacy-minded users will have to train themselves to look for it. Everyone else can just get on with whatever task is at hand.

Unfortunately, the notification of apps that have recently accessed the mic isn’t as useful as I’d like. On my SE, the list was limited to a maximum of just one app, so even when I had recently opened two or more apps that made access, I’d only see the last one. Also problematic: the list appeared empty if I accessed the control center more than about 30 seconds after an app made access.

These after-the-fact notifications appear at the top of the Control Center. Below is what appeared about 20 seconds after I opened an authenticator app that accessed my camera and then opened the guitar tuner that accessed my mic: 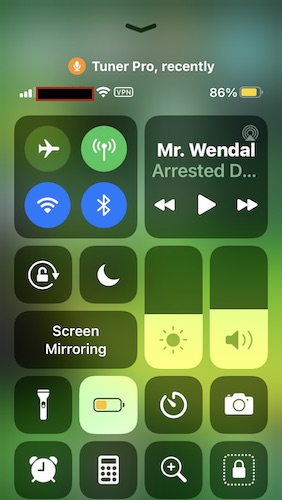 These limitations greatly diminish the value of the control center notification because they require a user to access the control center early and often. That’s a time killer. The feature would be more useful if the list refreshed every two to six hours and showed all apps that accessed the mic or camera within that time.

Control of apps that want to access local networks Some apps have good reason to access a local network. An example is an app that interacts with a smart TV and uses Bluetooth to sense when the phone is nearby. Here’s what iOS 14 showed the first time I opened an app from Samsung: 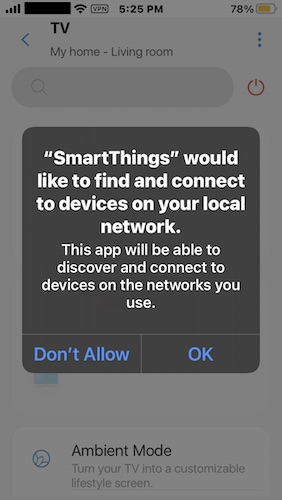 Plenty of times, however, apps have no legitimate reason for accessing local networks. iOS 14 lets users curtail the practice.

Finer-grained control of location access Once upon a time, iOS users could either grant or deny location access to an app, and that location was precise right down to the physical address. Now there’s a new option to give access to the proximate location. This is useful for a star-gazing app, for instance, which needs a general idea of where you are but doesn’t need an exact location.

Compromised password notifications iOS now has access to a database of passwords known to be compromised and warns users any time a password stored in the Keychain password manager is on the list. Apple says it does this in a secure and private way that doesn’t reveal the user’s password even to Apple. The company doesn’t say precisely how this is done. It’s likely similar to the clever cryptography behind Apple’s FindMy app, explained by Wired.

Better privacy when using Wi-Fi It’s surprising that Apple is only now randomizing the MAC addresses Wi-Fi chips use to identify themselves to Wi-Fi access points. These fixed addresses can be useful in cases when a trusted network wants to control what devices are allowed to connect, or to at least identify those that are.

The problem is that just walking by two or more networks controlled by the same person or organization is enough for the operator to compile a list of what devices and then cross reference them. The result: access points can log some of your deepest secrets, including what time you left the bar last night, who left with you, and the route you took home.

By default, iOS 14 will use a “private address,” by which Apple means a randomly generated MAC that’s unique to a given network. To disable the feature, turn off the Private Address button in the SSID settings. 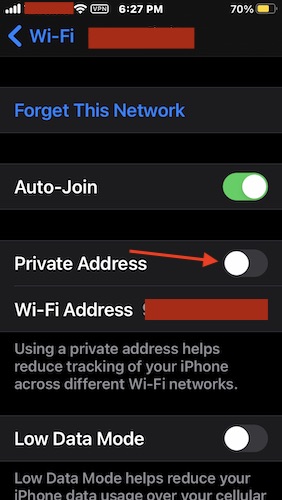 Otherwise, leave it on: 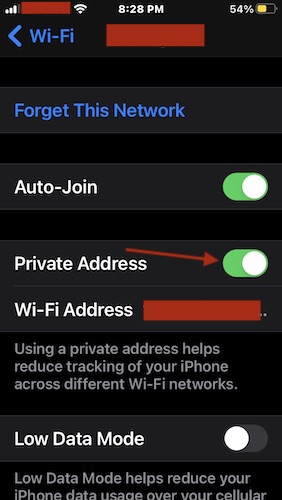 The feature isn’t as powerful as I’d like it to be. In an ideal world, it would periodically change the MAC address, or allow me to manually change it, so that a single Wi-Fi network can’t track me over time. Based on my brief testing, the random address appears to be permanently tied to a given SSID, even when you tell iOS to forget the network and log in anew.

Website privacy report Safari now provides a privacy report that summarizes the trackers that users have encountered over the past 30 days. To access it, tap the two letter a’s on the left side of the address bar. 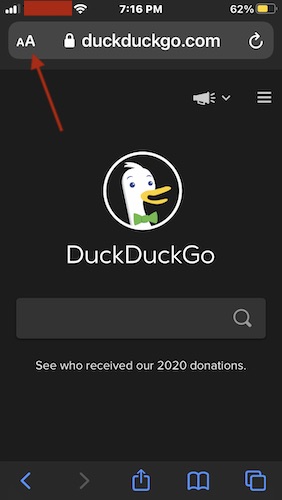 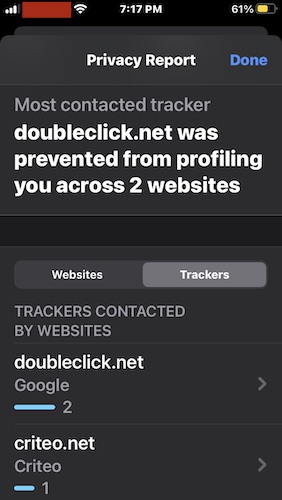 Anti-tracking delayed is anti-tracking denied One of the most anticipated privacy features was one requiring app developers to get a user’s consent before tracking their activities on third-party apps and websites. Alas, Apple delayed implementing the feature until at least next year after app developers, particularly those from Facebook-owned Instagram, bitterly complained.

For a company that says privacy is a fundamental human right, Apple’s postponement is a surprise. Fortunately, there are enough other privacy-preserving features to make iOS 14 a significant improvement over what was available previously. Use them and enjoy.

tedgould
reply
Weird that Apple delayed on the device ID permission prompt. Not sure what Instagram could say that would motivate Apple to change course. They're not going to remove it from the AppStore and they don't give money to Apple.
Texas, USA

Walmart to Raise Wages for Some Workers by Michael Corkery
Friday September 18th, 2020 at 12:03 AM

1 Comment
The raises at Walmart will be carefully watched because the giant retailer sets the benchmark for lower-wage workers. 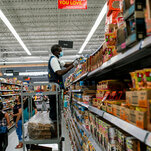 tedgould
reply
The NYT noted "the giant retailer sets the benchmark for lower-wage workers." The US government has ceded authority on protecting low wage workers from exploitation to... Walmart.
Texas, USA

The 2020 U.S. election will take place Nov. 3. See the full list of candidates in Texas, and find out who's on your ballot based on where you live. [ Read more ]

tedgould
reply
For Texas residents here is a good way to find out what will be on your ballot. Remember early voting has been extended so go early to allow for more social distancing at the polls.
Texas, USA

ICE deported a key witness in investigation of sexual assault and harassment at El Paso detention center by Lomi Kriel, The Texas Tribune and ProPublica
Wednesday September 16th, 2020 at 2:09 PM

Corruption within ICE seems to be far reaching. Every investigation shows more, and now they're actively sabotaging the investigations.
Texas, USA

1 Comment
There have been so many storms in the Atlantic this year that we are about to run out of names for them. Simon King explains what happens next.
Read the whole story

tedgould
reply
So many hurricanes we're running out of names.

Hey, Trump likes things named after him, how about hurricanes?

Did Lawyer for Alleged Kenosha Shooter Say He Will Be Known for Starting 2nd Revolutionary War? by Jessica Lee
Monday September 7th, 2020 at 4:07 PM

1 Comment
Differences between the April 18, 1775, "shot heard round the world" and the August 2020 killing of two people at a police brutality protest in Wisconsin are vast.
Read the whole story